The artifacts and techniques of a culture contain their thought and emotions. Japanese craftsmanship is silent but deep. Incorporating plenty of experiences, emotions, decisions – not visible at first glance.  At kame we’re interested in the attitude of how things are being created. Our goal is to be authentically Japanese but to also be very clear of the attitude, our attitude. We’re not copying or re-doing. We’re following our own way, creating our path, the attitude of our people, our team.

Back in 2014 Kaoru, Machiko and Daniel met for the first time. „Why is it that there’s no Japanese bakery in Berlin?“ was the lack that brought them together. They started doughing, imagining, planning. Starting with a stand at Saturdays Winterfeldplatz market in Schöneberg they followed a decent pace of development.  In 2015 they rent a kitchen for production and formed the brand kame. Meanwhile extending to the Markthalle Neun in Kreuzberg and starting to sell on events. In late 2015 there came the chance to open a cafe and they took it to open the place „Kirschblüten für Gottfried Wilhelm in January 2016. 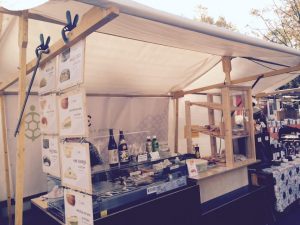 The stand at Winterfeldplatz market